No discussion of perspective would be complete without mentioning “foreshortening” which is defined (in “Wikipedia”) as “……. the visual effect or optical illusion that causes an object or distance to appear shorter than it actually is because it is angled toward the viewer.” A simple experiment would be to hold a ruler in front of you such that you can see its full length and then slowly rotate it. The ruler will appear to shorten as the angle of rotation increases until you are looking along the length of the ruler. I did exactly this and photographed it 4 times. Below you can see me rotating a ruler until I can only see its end. As a matter of interest that ruler has followed me all through my time in a drawing office and is at least 40 years old……and, like me, is looking worse for wear!!

Now I know that it seems to be a bit of an insult to you lovely folks intelligence to show you this…..but that’s the nature of a lot of stuff connected with art (and other disciplines in life)…….. we already know lots about it but weren’t aware of it. Of course the ruler appears to get shorter as we rotate it about its axis and because it was my job I was often called upon to calculate the apparent length of items that had been rotated through various angles. Rock and Roll……… I can imagine how impressed you are by my trigonometrical expertise. Now, of course, it’s done in a fraction of the time that it took me by virtue of drawing stuff on 3D Computer Aided Drawing.

But what has this do do with art? Dashed good question…….. and the answer is ……. lots.

Imagine that you are drawing a cottage looking on it at an oblique angle ie not directly on the front and not directly on the end. What you’ll see is the length of the cottage foreshortened by the angle it’s turned through. I made a model of a cottage and photographed it as I turned it through various angles. Note how the long side of the cottage appears to get shorter. 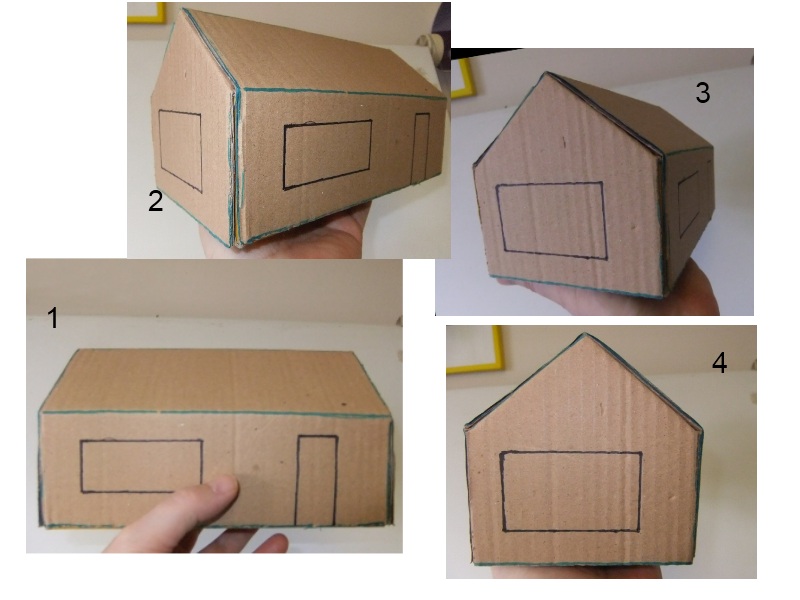 Starting at image 1 looking directly on the long side of the cottage and then rotating clockwise. Note that we can see a part view of the gable end (ie the short side) of the building that we couldn’t see at all in image 1, and also how the longest side is a little shorter. This foreshortening of the long side continues until we are looking direct on the gable end and cannot see any of the long edge and it has effectively disappeared.

Below is an example of perspective that includes foreshortening. Does anyone really think that his hand is actually bigger than his head? Or that his arm is very short? Of course not, it’s the effects of perspective and foreshortening. When an artist creates an image, for example a landscape, these aspects (and others) should be considered.