So…….we know that when we mix yellow and blue we get green. It sounds simple but so many people really struggle with greens. It’s almost like the suppliers of painting sets are actually trying to make it harder too. Why do I say that?……..well,  because they put greens into out paint box that about as much use as a chocolate fireguard…….that’s why. The little tinkers.

How many people have looked into their box of paints and spotted “Sap Green” or, even more exotically “Viridian Green”, so you put some into your palette and start trying to do a tree or hills or grass ………only to wonder if the people who lived in your landscape would appreciate the surreal flora that they are surrounded with. These greens are just not convincing. As my good friend Alan Owen would say about Sap Green “it’s mad…..it needs knocking back a bit” and he is, of course, quite right. (“knocked back”…… what on earth does that mean?…… more of that later) 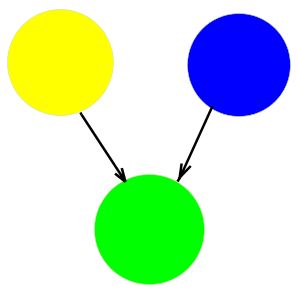 . Those of you who have read the tutorial “Colour Mixing” on this website will already be comfortable with the idea of creating green by mixing yellow and blue ………. But, how much blue to how much yellow? And the big question not answered it that help document; which blue?……. which yellow?

Oh the choices, the choices ………… you need to be careful not to pull a muscle in your head …….I did and I promised myself not to think that hard ever again. If only I’d had known that it’s actually quite simple. Well, it’s simple, but you need to consider a few things. You will recall how I referred to the relative “power” of colours when it comes to mixing, well, the same “power” consideration can be applied within a particular colour.

Then you might think…….ok, the Ultramarine Blue is quite a strong blue, are there any weaker ones?….. and how would they react with each of these Yellows? Consider Cerulean Blue, which, like a kind of Sky Blue, is quite pale. How would they mix with different yellows?

The answer is to to create a reference sheet with all kinds of Blues (and, in fact Black & Payne’s Grey) mixed with all the different kinds of Yellows.

I have started one of these. The idea is to pick a Yellow. In my case I

started with Lemon Yellow, and then pick the first “Blue” (in my example I started with Paynes Grey which is usually a very dark Grey/Blue) Starting with 100% Lemon Yellow I painted a filled circle. Then I mixed into the yellow gradually increasing amounts of my chosen blue and painted a filled circle with each successive mix. Good practice would entail continuing adding Blue until it will not go any “Bluer” in which case you’ll end up with a representation of all the different kinds of green that kind be mixed using those two choices of Yellow and Blue.

…….Start another line and use the same yellow but change the blue and repeat the process (I chose Ultramarine Blue for my next row of mixes. Keep changing the blues and incrementing the amounts of it while creating circles of paint in that particular mix until you’ve mixed every blue with your choice of yellow.

Then…… use another yellow and repeat the process with every kind of blue that you can find. You will eventually end up with a very handy crib sheet for mixing greens. You will, of course, add the colour components at the side of each row of mixes.  I created a partial reference sheet for greens (see below) but I didn’t show the evolution of the greens until they were full of the blue component. You will benefit from doing the full exercise. 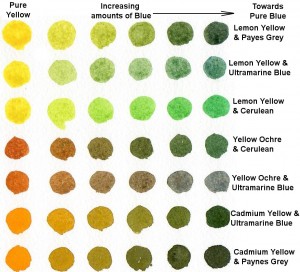 The above image shows just a few of the mixes of some yellows with a selection of blues but the sheet should ideally have been continued to the right until the extreme right circle in each row, was blue.

Ah…..so….that’s mixing greens is it? Well……. yes and no. (doesn’t it make you mad when people say that) The mixes certainly are green but there could be more depending on what you want from the green. Imagine that we had a particular mix of green that we were reasonable happy with but it was just a bit too bright, a bit too vivid a, “a bit mad”; what could we do? Well, we could “knock it back a bit” ie we could dull it down. There are a number of ways that this can be achieved and depending on who you ask you could well get a different answer.

I’ll give you two options…….. you try them and decide which you like, remembering that different situations might dictate different methods. it’s as difficult as this:- just add a little black or red (remember that brown is a type of red)

After a little practice you will arrive at not only a way to create various greens but also ways of dulling a particular green mix.

………and that’s it really apart from practicing and remember one very important thing ….. that’s remember to mix enough green for your painting….and a bit more for safety. You really don’t want to run out of the mix that you’ve spent so much time creating. Having said that, if the green is for grass or trees then slight differences in mix can actually be a good thing. Most artists will deliberately change the colour to add to interest.

…..and you’d do well to remember the advice given to the stranger

in Westhoughton when he asked how you get to the Carnegie Hall, the answer was “Practice young man…….practice,practice, practice”